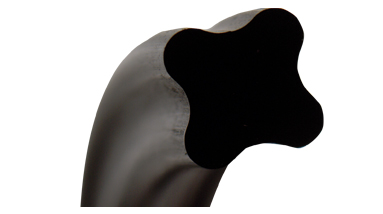 Quattro seals feature a geometry with twice the number of sealing surfaces in comparison to standard O-Rings. This allows a four-lobed seal to operate at lower pressures and/or with less squeeze than standard O-Rings. The four-lobed configuration also reduces the likelihood of spiral twisting in reciprocating applications by creating a more stable seal. This is because rather than relying solely on squeeze alone to create a seal, quattro seals use both squeeze and deflection.

Use quattro seals in standard O-Rings, quad ring grooves or in deeper four-lobed seals with specific grooves, which results in less friction and longer seal life. Four-lobed seal grooves can also be narrower than their O-Ring counterparts, since spiral failure is less of an issue. High Performance Seals stocks numerous different AS568 sized quattro seals in either 70 durometer nitrile or 75 durometer Viton™. Please go to our Groove Design Chart for Four-Lobed Seals for quattro seal groove recommendations.